Due to the collapse of some of the High Street and Out of Town Retail Park big names we sometimes find these commercial properties evolve to become the premises for other businesses or for other uses. As Independent Building Surveyors who specialise in retail premises we believe it is essential to have a commercial building survey if you are buying a shop freehold as it will save you time and money. If you are considering taking on a shop lease or are leasing a shop then a Schedule of Condition will help you to limit any future liabilities which can be very costly if you are not protected with a Schedule.

In this article, we look at the popular video rental store Blockbuster and its collapse.

Don’t take on a Lease
without a Schedule of Condition 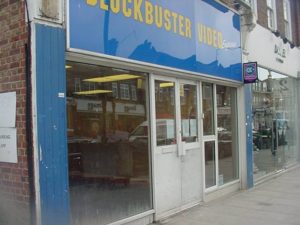 Why Blockbuster Failed? A Lesson for the Commercial Property Sector

Founded by entrepreneur David Cook, the first Blockbuster video-rental store opened in Dallas, Texas on October 19, 1985. David Cook was a previous computer software services provider to Texas’s Oil and Gas Industry. Innovating the video-rental industry, it opened with about 8,000 video tapes displayed on their shelves like a bookstore, equipped with a computerised check-out process, which is a feature only a few video-rental stores would have. Their success resulted to aggressive expansions, becoming one of the largest in-home entertainment providers. Before the end of 1989, the video-rental giant had reached its 1000th store and had already expanded globally. 1

Viacom Inc. seeing its potential, later acquired Blockbuster in 1994. However, in the mid-1990s, Blockbuster faced serious threats when digital video disc (DVD) made its debut, Netflix came out as an online DVD rental service, while Amazon.com launched their video and DVD store, and pay-per view services became available to those with cable subscriptions. By 2004, Blockbuster had 9,000 stores globally. This attracted several investors, including Carl Icahn. In 2007, the CEO John Antioco stepped down due to a feud with Icahn. Trying to fight off the competition with Netflix, Blockbuster launched its online DVD rental services in 2008. 2 years later, Blockbuster filed a bankruptcy protection to get rid of its $1 Billion USD debt. The video rental chain assets were later acquired by Dish Network in 2011 for $234 Million through auction. The assets include 1,700 stores which later Dish planned to close overtime, while planning to use the store locations to sell mobile phones. 2 3 4

On November 2013, Blockbuster closed its remaining 300 retail stores. About 2,800 employees lost their jobs because of the closure. Several speculations of the cause leading to the closure of a once successful video rental chain has included the availability of digital content over the internet. 5

Reed Hastings, founder of Netflix flew to Dallas in 2000 to propose a partnership with Blockbuster CEO John Antioco. Hastings proposed to run Blockbuster’s brand online, while Blockbuster would promote the Netflix brand in their physical stores. The proposal was rejected by Antioco’s team. Blockbuster was the leading brand in the video rental industry and wouldn’t simply agree with the proposal of Netflix which was just a juvenile at that time. Much of the revenue of Blockbuster was coming from late fees

incurred by its customers. On the other hand, Netflix was operating at a very low cost, because it did not have physical locations. They also do not charge late fees, since they were offering subscriptions wherein the customers can watch videos as long as they want within their subscription period. In other words, Netflix was offering the video rental chain giant to alter its business model of charging late fees which was the latter’s primary source of profit. 6

Netflix business model of providing video via mail was seen as a disadvantage, because it takes time compared to customers picking up a movie on physical stores on their way home. Many were reluctant to Netflix mode of service, but eventually customers were able to convince other people to try it as well.

In the mid-2000s, Blockbuster introduced mail-order movie rentals and introduced streaming but were already too late to catch up with Netflix. Blockbuster with its 9,000 physical store locations were not quick enough to change their strategy and succumbed to their real estate and staffing costs. 7

At present Netflix is worth about $70 Billion dollars which is 30 times more than the previous worth of Blockbuster. 8

Don’t take on a problem property

Blockbuster and the Commercial Property Sector

There are relevant lessons that can be inferred from the history of Blockbuster. In fact, there are several lessons on the commercial property sector in particular. Firstly, whether or not Blockbuster has acquired Netflix back in 2000 or not, the former could have adopted an early and prospective business strategy of putting its 9,000 stores into good use by converting them into distribution hubs for other products and services. Blockbuster was only able to do this belatedly without gaining enough traction, as a reaction to its maturing industry.9 Secondly, since the advent of the internet, many have come to realise that most services and products can be provided online without having to have to run a physical store. This is a highly preferable business model as it provides accessibility and ease of use for the consumers, while lowering overhead costs for the businesses. 10 11 Thirdly, the commercial property sector can fully utilise the potential of the internet and should not be threatened by it. The internet will widen the scope of estate agents and augment the services they are already providing. Commercial property is a valuable investment, and consumers would still prefer to rely on expert advice from someone they can trust.12

13 Finally, while it’s true that the internet has disrupted our activities and the way we do business, some services and businesses will still require a place to operate, and commercial properties are still expected to generate income. Some commercial properties will no doubt provide premises requiring a change of use as the High Street ever evolves just free phone us today on 0800 298 5424 for advice.

Learn more about Permitted Development and Prior Approval CLICK HERE