As we see the collapse of some of the High Street and Out of Town Retail Park big names we sometimes see these commercial properties evolve to become the premises for other businesses or for other uses.  As Building Surveyors who specialise in retail premises we believe it is essential to have a commercial building survey if you are buying a shop freehold as it will save you time and money.  If you are taking on a shop lease then a Schedule of Condition will help you to limit any future liabilities which can be very costly if you are not protected with a Schedule.

In this article, we look at the popular toys store Toys R Us and its collapse. 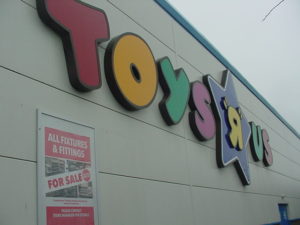 The American toy company, Toys R Us was founded in 1948 by Charles Lazarus which started as a children’s furniture store called Children’s Supermart. He later added toys on to his products and began to shift focus from furniture into juvenile-products in general in 1957 which gave birth to Toys R Us in Rockville, Maryland. The firm’s success is reflected by its continuous operation for 65 years with over 800 stores in the US and 800 more in other countries.1 2

In 1966 the company was later on acquired by a US company which was also a toy-store chain called the Interstate Department Stores Inc.3  Toys “R” Us continued to operate successfully and was considered an example of a category killer. A category killer is business that specialises efficiently in a particular sector that it eliminates opportunities of competition from small and large retailers.

In 2005, Bain Capital, Kohlberg Kravis Roberts, and Vornado Realty Trust bought Toys R Us for $6.6 Billion. The company became private with a plan to boost sales and position the company for a stock offering in a few years to attract investors. This plan did not come into fruition when it withdrew their IPO registration on 2013. 4 Later in 2014, the company positioned itself for long term growth and opened a multichannel distribution through its e-commerce and mobile applications. In 2015, their flagship store at Times Square closed attributed to high rent costs. 5

Do you need help with Permitted Development? We will save you time and money – Call us today Free Phone 0800 298 5424

Toys R Us UK collapsed into insolvency risking 3,000 jobs in the UK after closing its stores in the US. This occurred only after two months just when the retail giant won creditor backing for their restructuring plan to manage their steep rent costs as part of its rescue efforts. The retail giant however failed to raise the much-needed cash to pay their tax liabilities which amounted to £15 million. The collapse occurred after a number of private equity funds and restructuring specialists walked away to buy the firm. Moorfields was appointed as administrators to process the closing of operations with over 105 stores set to be closed down in the UK. 6 7

Their online store has already been closed and this was followed by the collapse of the company itself. 25 out of the 105 were also closed immediately. In the meantime, some physical stores of Toys R Us continued to operate offering discounts to their goods until their inventory is cleared. The administrators stated that they remain open to interested buyers of the business. 8 9 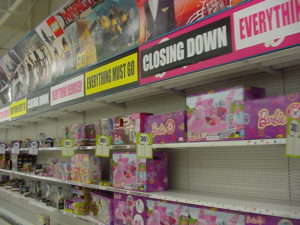 Cause of the Collapse

It should be noted that Toys R Us already filed for bankruptcy in the US prior to its collapse in the UK. Toys R Us suffered the same tragedy that other retail stores and businesses experienced from the impact of the online shopping which offered consumers convenience, more choices, and faster delivery. The retail giant failed to adapt to the shopping habits of consumers, and the preference of children for downloadable games, applications, and other forms of online entertainment. Critics have claimed that the fall of the retail giant was the lack of flexibility to meet consumer demands.10

The decreasing consumer spending and the inflation cause by the Brexit were also included as the major causes of the shutdown in the UK.11 The rising labour costs from the National Living Wage has also increased the costs of their operations.12

To add to the foregoing factors, their smaller and more interactive stores have been outperforming their older warehouse-style stores. These all resulted in a low performance in sales which made them unable to meet the cost of steep prices in rent and a £15 million tax bill. 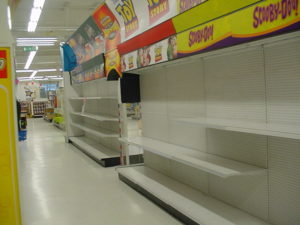 A year prior to the closure of major retailers, rents have already been falling in London due to Brexit.13 The rents may continue to fall due to the trend of retail stores closing. Many retailers are now choosing smaller store footprints. The rising property taxes in certain locations will also cause a decline in the operation of physical stores in contrast to online stores. If the trend does continue, there will be an excess supply of space due to the decreasing demand.

The closing down of various retail stores and businesses in the UK caused by high overheads, inflation, decreased consumer spending and online shopping behaviour is opening up opportunities for new players to enter the market. Although consumer spending is increasing online, there is still a niche market for small retailers to operate a physical store where consumers will actually pay a visit. The new and small players can take advantage of the decreasing prices in the UK retail market. 14